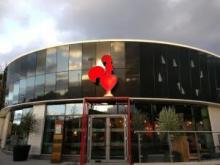 How Helpful?:
Author:
Mike Peters
Number of Visits:
This was my first visit
How Busy?:
A few tables occupied
Date of Last Visit:
Wednesday, April 12, 2017
Time of Day:
Weekday Dinner
Rating:
4.25 / 5
Friendliness of Staff:
4 (Good stuff. Very polite)
Speed of Service:
4 (5 - 10 mins - Some conversation had begun)
Quality of Food:
4 (Above average - noticeably tastier than normal)
Decoration & Cleanliness:
5 (An exceptional Nando's! (Please tell us why) )
Comments - Stand out in our monthly competition! What did you eat? Unique aspects? Parking/transport tips?:

Last Wednesday 12th April 2017 I attended the launch night of the first restaurant to open in the redeveloped Old Dairy Citygrove development in West London. Whilst of course it is certainly not the first Nando’s, it was a significant one in a milestone year for the brand.

In fact Nando’s have racked up a seriously big, Brian Lara sized cricket store total of restaurants in the UK. By close of play on launch day, Wednesday 12th April 2017, the opening of Nando’s South Ruislip, they had moved on to a score of 399 in the UK.

Not only that is that an impressive number, this comes in their 30th year of business (Est 1987 in South Africa) and exactly 25 years after opening their first in England in 1992, just 8 miles away in leafy Ealing Common, West London.

Speaking to one of their four, yes four, manager’s, Shan, on opening day, he spoke of his pride at the new development especially as there were fears the restaurant and proposed retail development might not have even get underway after having to face a legal challenge from supermarket giant Sainsbury’s. In 2015 their action was defeated in the courts by the local Hillingdon council paving the way for building to commence.

Fast forward just two years and fitting out took merely a swift six weeks from early March to April this year. During the 7-8 week leading up to the opening, Nando’s trained a team of entirely new employees who were all getting their first taste of working in the catering industry. They have provided a welcome boost for employment in the area by contributing 34 of the anticipated 536 new jobs at this Arla Development.

For Shan, “this is a dream come true and is all down to the full effort and hard work of the dream team, the Nando’s family following the Nando family values of passion, pride and integrity. We are one big family.”

Walking into the restaurant on opening day you’re immediately struck by its impressive size and wow factor. As with all Nando’s this one has its own unique style and character. It is very much based on South Africa in keeping with Nando’s South African origins. This includes the unusual design of the lights, the art work and the beautiful, melodic South African music playing in the background. Loud enough to be heard but not so loud you can’t hold a conversation. The place has a big, light and airy feel to it. I particularly liked the outdoor dining area and can imagine those tables being extremely popular and hard to come by on very hot days. All in all this helped create a lovely ambiance for dining.

On a more practical, prosaic note, the sink for customers to wash their hands beside the fizzy pop drinks dispensers was a nice idea for the hygiene conscious diner.

The location is different from the usual Nando’s typically located on busy High Street’s or inside major shopping complexes. Currently it is just the third anchor tenant on the Old Dairy site, along with Aldi and B&M. Sited on Victoria Road, South Ruislip, it’s less than 1/4 mile away and takes just under 10 minutes to walk there or is one short bus stop away from South Ruislip station (Central line). For drivers, there is ample free parking opposite the restaurant. Later in the year it will be joined by other restaurants and a Cineworld cinema right opposite (June/July 2017). Essentially though it is sited in the heart of a fairly quiet, middle class, residential area, which should be great for business.

Service was impressively fast, with drinks served before my acquaintance had even picked up our cutlery and sat down! The meal followed within a pretty rapid ten minutes.

I also tried the supergrain which are grains, greens and full of beans with an avocado and buttermilk dressing. That was new to me. It felt and tasted like a very healthy option addition to my meal.

The food was really delicious, with a lovely, tangy spicy taste to it. I could have done with some more rice, but the side portions were typical Nando’s portions, which I guess have often been on the small side and often leave you feeling a bit like Oliver Twist “wanting more!”

I enjoyed washing down my meal with a bottle of their 2M beer, described as a “light, crisp and refreshing beer from sunny Mozambique.” I’d not come across that brand before. I normally associate 2M with tape (or is that 3M)! Either way it had a pleasing light flavour to it that went down very well with the meal and certainly was a lot healthier than and tasted nothing like sellotape! At £3.85 for a 250ml bottle it was somewhat on the pricey side though.

Most of the menu was standard Nando’s but there seemed to be some new additions specific to this branch. I liked the look of the new Trio Burger – Peri Peri Chicken, Halloumi and Mushroom. That will be available until 15th May 2017 or until stocks last so I can only assume it will only remain in the longer term if diners eat enough of it between now and then!

For dessert I enjoyed White Chocolate Raspberry Swirl cheesecake. I had this with cream and found it to be tasty, if a little chewy. It comprises “waves of raspberry sauce swirling through a creamy cheesecake and is lightly caramelised on top.”

This was recommended by our very helpful Waiter Akashai. I also tasted the salted caramel brownie. This rich chocolate brownie had a delicious hint of salted caramel and was absolutely delicious with the ice cream and was satisfyingly filling. Even sexy according to my dining pal! Hmmm. Sexy food? Not heard of that before but will try to look out for and factor that into future restaurant reviews!

On arrival there were a decent handful of diners, but by the time we left there were around nine parties totalling 24 customers. That was good for early evening on opening night. I was told there was a healthy lunchtime trade too. Considering there’s been no advertising that bodes well for the future success, especially when it gets the boost of other stores opening (ASDA is due to open in May/June) and completion of the neighbouring Bellway Homes development.

A slight niggle were the overzealous Waiters and Waitresses over eager to please on their first day, constantly asking if everything was alright. It was perfectly fine. It just wasn’t necessary to be asked about seven times within an hour by four different waiters and waitresses! Many seemed young and inexperienced. Perhaps they were simply following orders and trying to be helpful. They were friendly though so it wasn’t a problem and they seemed genuinely keen to ensure we were enjoying our meal and having a good time. That’s great and in keeping with the Nando’s family friendly ethos. After all they’ve not got to 399 not out by not knowing what it takes to open and run a good restaurant or two.

To reach that number in just 25 years since 1992 is some achievement, averaging 16 per year. That’s quite staggering really as it’s in excess of one a month!! I look forward to dining there again.

This review was first published on https://tiemotalkofthetown.wordpress.com/2017/04/19/399-not-out-for-nand... and is published here with the permission of Tiemo Talk of the Town