Today Rate Your Nando’s turns five. What started out as a simple documentation tool to track personal Nando’s visits during the summer holidays, has now become a worldwide phenomenon, with over 100,000 unique visitors from 164 different countries in just the last 12 months alone. I thought I would take this milestone to reflect on how we got to where we are today.

It all began in my car on a Thursday afternoon. The day was quite typical of one of my university holidays: wake up around midday to meet Marc for a late Nando’s lunch. Regular trips to Nando’s were nothing new, having been at least weekly for the previous couple of years, but something had changed recently. We realised we had now been to quite a few different ones (I recall it was about 15 each at the time), and the idea of trying out a previously unvisited restaurant was becoming increasingly exciting. It added a new level of diversity, and we were quickly discovering that not all Nando’s are the same. Spoilt for choice in North London, we made our way to an unvisited restaurant*.

At the meal we brainstormed how these new restaurant visits could in some way prove useful to either ourselves, or other people. We settled on the following plan: write some marks out of 5 on the back of each receipt, and ask someone to take a photo of us together outside. This unambitious, but seemingly sensible objective, quickly fell apart. I wasn’t even in the first picture because we couldn’t find someone to take it, and the receipt system felt unsatisfying. On the drive home I therefore suggested that I create a simple website, using my incredibly basic design skills. It could contain the information from the receipts, and prove a more robust way to back up the data from each visit. It only needed a name…

Nandosreviews.com, nandosvisits.com, reviewyournandos.com, rateyournandos.com. All seemingly sensible, but only one would become etched into the annals of time. Unfortunately I can only take credit for being a part of the discussion; Marc was the one to come up with rateyournandos.com. It didn’t take long for me to get home and purchase it. At 18:21 and 58 seconds on the 6th August 2009, Rate Your Nando’s was born.

Most people probably don’t remember the first version of the Rate Your Nando’s website. Looking back, it was a shocking sight to behold; a design relic from the late-1990s, with a static homepage, where I typed out a list of the roughly 200 UK restaurants at the time. This seemed like a reasonable start, but why not add the addresses and phone numbers I thought? It wasn’t as if I was busy, and then we could use the now-public page as a reference when we go on a Nandventure. Next I created a webform for us to submit reviews, using a service called Freedback (free…feedback…get it?) and started the not-so-trivial project of getting the coordinates for, and mapping each of the restaurants. ‘I’ll use these skills sometime in the future…’ I kept telling myself, and a map was actually very useful for spotting unvisited Nando’s.

That more-or-less encompasses the design philosophy of the original website: slowly add useful information/features over time. It didn't take long for pages, now considered vital for Nando's fans the world over, to pop up. These include the Halal Nando's, Nando's Statistics, and History of Nando's pages, though perhaps the feature I am proudest of, is the International section. It certainly wasn't an easy task to locate and map every Nando's restaurant in the World, especially when Nando's themselves didn't seem to have any idea when contacted. The resulting map is a sight to behold, and along with the ability to review any of these restaurants (simply click a Barci on the map), is a truly unique offering.

So how did Rate Your Nando’s get its first visitors? As with a large number of websites, a certain amount of credit has to go to Google. Google, and its ranking of our pages in keyword searches such as ‘Nandos fanpage’ and ‘XXXX Nandos review’, allowed other Nando’s fans to find us and submit their own reviews. You can imagine the excitement when we had our first random review. ‘Is it a prank from a friend?’ we asked ourselves (you can imagine what they thought of what we were doing). Turns out it wasn’t, and we soon had a hundred reviews of restaurants all over the UK. This gave us a new goal: 100% review coverage of UK Nando’s. Monthly competitions where we gave away peri-rub, sauces, and gift cards went some way to achieving it in late 2011.

The next major hurdle for us to overcome was the shutting down of our free website hosting solution. Without a website, and with our main goal having been achieved, this ultimately lead to us closing down the website in April 2012, and posting a rather saddening farewell message. ‘Is it really over?’ people asked. We thought so, but fire is a rather unruly entity, and the Nando’s flames which burn inside us simply couldn’t be put out. ‘Is there nothing you can do to bring it back?’ Marc would ask me. Luckily my personal situation had changed, and I now worked in an IT environment. This proved useful, as I racked the brains of some of my colleagues (now friends), and came up with a proposal using the CMS Drupal. I began porting the old website pages in my spare time after work, and even working on what was at the time our holy grail: an automated review system. Come July 2012, Rate Your Nando’s 2.0 was launched, and other than some tweaks and a cosmetic overhaul, it stands strong to this day, and rather usefully, mostly looks after itself.

The only place left to look is to the future. Five years seems like a long time looking back, and a lot has changed, so where will we be in another five? Honestly, I’ll just be happy to still be eating that Extra Hot chicken once a week.

* We have both racked our brains and can’t remember which Nando’s; I wish we could! I only remember Marc’s mother exclaiming about how far we intended to travel to eat chicken we could find 5 minutes’ drive away.

Ryan: to this day something like 10% of the reviews on the website are yours! Without you our coverage in the early days would have remained spotty at best, and your input to our news section drives many new visitors to the website. We still use you as a standard reference for Nando’s fandom: four different restaurants in six hours, with a full meal at each…the ultimate Nandoer.

Pompey Ranger: Driving all the way to Istanbul Turkey, only to find out the Nando’s has closed down. All 15 American Nando’s in a week. The exchanges of Nando’s-based insults with Adam Nicol…

Adam Nicol: For taking reviews to a new level by creating the previously unknown concept of a 1,000 word review.

Chris and Dan: For having the patience to work with me to set up RYN 2.0, despite having no interest in Nando’s whatsoever!

Minty: the first Patrao to take an active interest in the website and meet with us. Sponsoring our monthly competitions back in 2011, and hosting the very first Reviewer Dinners, gave us the confidence we needed to get to where we are today.

Nando’s: For the chicken, for the ups and downs, and for this unique ex-peri-peri-ence. Thank you!

I dug up some screenshots from the old website (and couldn't resist a cake), enjoy! 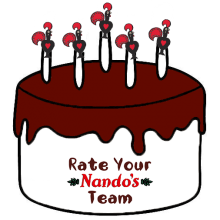 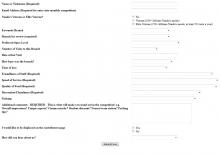