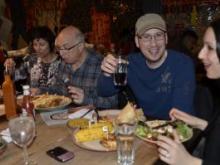 How Helpful?:
Author:
Adam
Number of Visits:
10-50
How Busy?:
A few tables occupied
Date of Last Visit:
Sunday, July 12, 2015
Time of Day:
Weekend Lunch
Rating:
1.88 / 5
Friendliness of Staff:
1 (Rude. Where is the Nando's spirit?)
Speed of Service:
2 (15 - 25 mins - Where's the food? Might have asked a staff member)
Quality of Food:
1.5 (Very disappointing - cold, flavourless, burnt)
Decoration & Cleanliness:
3 (Standard Nando's, nothing bad, nothing exceptional)
Comments - Stand out in our monthly competition! What did you eat? Unique aspects? Parking/transport tips?:

My worst ever Nando's experience.

This was my first visit to this branch (my favourite one) for around three weeks, and I was surprised to find no members of staff that I recognised.

I walked in carrying my two year old daughter, and after waiting to be seated for four minutes I gave up and picked up a high-chair myself and took it to an empty table (this wasn't hard to find as only three other tables were in use).

Still waiting to be acknowledged by a member of staff, I went to order the food. My order was taken by Zane. Inexplicably, she walked off while I was mid-order to go and serve somebody else at another till. She returned and took the rest of my order. She presented the card machine and when I asked if it was contactless she looked at me as if I was speaking in a foreign language, took my card, inserted it into the machine and prompted me to enter my pin.

Although we waited 19 minute for the food to arrive, not once did anyone offer my daughter some crayons etc. When the food finally arrived, it was sub-standard.

My daughter's portion of chips was so small I was actually able to count the number of chips (10 - picture attached). Having waited so long for the food to arrive there was no point complaining about the small portion - they'd only have taken it away causing more agitation for an already restless two year old.

I then picked up my chicken wrap to find all the chicken was burnt (in both wraps) and that the second wrap was only half full (pics attached).

I would name and shame the waitress who came and took all our cutlery (without asking) while we were still eating, meaning I had to go and get another fork to finish the main course and another spoon for the yoghurt we'd already ordered, but she wasn't wearing a name badge.

The frozen yoghurt wasn't frozen and had started to melt by the time I got it back to the table. By then I was losing the will to live, never mind to take a picture.