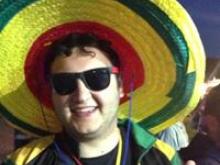 "Once more unto the grill" were the words that my colleague and I joyfully cheered as we headed through the Old market of Spitalfields for the tongue tingly peri peri glory that all five senses so desperately craved and desired. The buzz was ecstatic and there was no way that either of us could have expected the events that occurred. With the weather being overcast a gloomy only the sweet heat of whole chicken could bring back to life the dynamic duo, who had been struggling to achieve anything substantial on a dull, drab Tuesday. We join our heroes at the entrance to Nando's Spitalfields

The heroes of our story looked at each in disbelief it was the first thing that had gone well for them all day, well except for being alive! They scurried over to the table and without even a moment to ponder their surroundings they headed straight to the counter to order. As the two bounded, smile from ear to ear, over they were welcomed with the sound that every true nando's lover longs to hear:

What disaster! In their excitement the heroes had forgotten that they were sat at table 22 and whilst one returned tail between legs to check the other began with his order:

HJ: "Butterfly chicken, medium, salad on the side and halloumi - the boom boom!"
Nando's staff #2: "Any drinks with that?"
HJ: " Just water please."

With this he hurried to the condiment table grabbed his cutlery by the pussy and began his movements back to the table. The queue had swelled and the orders were coming out thick and fast. they knew they would be in for an average wait for their food.

Upon it's arrival both heroes dug in. The atmosphere at the table had changed, no longer were the two heroes excitedly giddy but rather an intense silence had descended over table 22 and the consumption began. A short time after there was a interesting interaction:

Reaching over the table the Nando's staff #3 grabbed the glass and asked "Fanta is it?" A odd question as there aren't any other orange drinks available but the hero confirmed "yes!"

As the fanta was delivered the heroes finished their meals, got up, and set off. A meal that will long last in the memory as "the time we went to Nando's and the staff got you a refill"