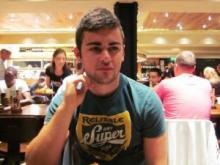 How Helpful?:
Author:
Chris C
Number of Visits:
2 - 5
How Busy?:
Almost Full
Date of Last Visit:
Wednesday, September 7, 2011
Time of Day:
Weekday Lunch
Rating:
3.25 / 5
Friendliness of Staff:
3 (Not bad. Did everything I asked of them)
Speed of Service:
4 (5 - 10 mins - Some conversation had begun)
Quality of Food:
2 (Quite disappointing - seems rushed, may have some parts burnt)
Decoration & Cleanliness:
4 (Very clean, newly furnished, impressive artwork and lighting)
Comments - Stand out in our monthly competition! What did you eat? Unique aspects? Parking/transport tips?:

After a long, hard morning of trawling around London (and A&F across the street) on a nice Capital city mini-break; a Nando's was well and truly needed to refuel the batteries- especially before I was (unfortunately) dragged around the infamous Topshop on Oxford Street (which is a 3/4 minute walk away)

Pleasantly surprised by the fact that the two of us could be seated immediately at 1 30 in the afternoon, we were taken to our seats which were tightly spaced downstairs.

Nonetheless there was a queue of 10-12 people when we went to order our food and we thought that our food would be at least 15 minutes in the waiting.

I ordered my standard garlic bread, peri-peri chips and HOT half chicken (although the waitress commented without a hint of sarcasm that they don't serve them cold and then proceeded to ask me which sauce I wanted on my chicken).

However, we were pleasantly surprised when our food arrived about 6/7 minutes later; just after we collected our cutlery and sauce (which was abundantly stocked).

Overall, I was very impressed at this point by my first visit to a London Nando's branch but I was quickly disappointed when the food arrived. The chicken was very dry, their was a tiny amount of peri-peri salt on the chips but at least the garlic bread was good.

In summary, I was happy with the whole experience mainly because of the location but I think the food left a lot to be desired- especially compared to the branches in Manchester!