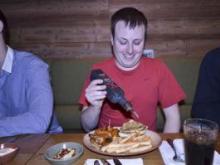 How Helpful?:
Author:
Will Bone
Number of Visits:
This was my first visit
How Busy?:
A few tables occupied
Date of Last Visit:
Sunday, April 8, 2012
Time of Day:
Weekend Dinner (Inc Friday)
Rating:
4.88 / 5
Friendliness of Staff:
5 (Wow, I feel incredibly welcome! Recognised if a frequent visitor)
Speed of Service:
5 (Under 5 mins - I had only just got back with my cutlery and sauce)
Quality of Food:
4.5 (Great - Very tender, piping hot, not at all burnt, dripping in sauce)
Decoration & Cleanliness:
5 (An exceptional Nando's! (Please tell us why) )
Comments - Stand out in our monthly competition! What did you eat? Unique aspects? Parking/transport tips?:

So I have been living in Witham (some 15 miles away) for a good few years now and having been to pretty much every Nando's in and around Essex this happened to be my very first visit.

Now firstly, I didn't even know where this was, to my amazement (and having had to call the restaurant to ask for directions!) I realised that this was tucked right behind the high street where I have walked by for many years without even knowing, big fail on my part to have missed out all those times (thinking it was on the other side of Chelmsford) but I'm sure I will make up for lost time in the years to come.

So we arrived at the restaurant, first impressions (having been excited to go to a new Nando's!) was that the restaurant was a lot bigger than I expected, the staff were friendly and gave us a nice little booth (always love the bigger tables!) as the restaurant had a few tables occupied so wasn't really too busy. The staff were very good, probably the best I have experienced in a Nando's restaurant in all honesty, felt looked after from the minute we walked into the door until we had left which isn't always something you feel in Nando's being a fast food type of restaurant rather than one to dine in, but a high 5 for looking after us, it made a big difference I felt.

The food (extra hot wings, peri chips, garlic bread & haloumi cheese) were a delight, felt very hot compared to Nando's I have had on recent visits (Harlow/Goodge Street) which scored a 4.5, nearly perfect but very tasty! Garlic Bread gets a special mention as well because that was cooked to perfection, I should have taken a photo really but it was just perfection, it was so nice I didn't want to eat it...but obviously I was hungry so I did. Everything else was good as well.

The restaurant looked very clean and had a sneaky look around the place whilst on my way to the gents, very impressed with the upstairs layout and again the restaurant was much bigger than I thought, the only negative thing I would say is that its hidden away from the high street but the restaurant itself was very impressive I have to say.

The person I was dining with had the White Chocolate Raspberry Swirl with Clotted Cream and said that it was lovely, although did give the dessert a miss myself after still licking my lips following the meal and being full up on refillable fizzy drinks.

So overall a very pleasant dining experience, I have heard great things about this restaurant and being part of the facebook group I have always got the impression that its well liked by people and that its very engaging with its visitors (always good special promotions going on here, e.g. two stamps on tuesday, student discount on monday, freebie wednesdays & burn the bill thursdays!!) so was glad to feel the same experience myself, I almost feel guilty for leaving it this long to visit the restaurant but can assure you I won't leave it as long next time. A very big thumbs up to the team at the restaurant, can't wait to pop back in soon! :)