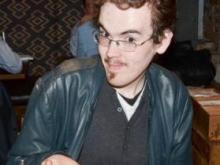 It was on a cold, foggy evening up in Blackpool seeing friends where the decision to go to Nando's after a trip to the Coral Island Arcade was formed. Me and my other Nandistadors had been here when I was last up in the city back in April and the chance to go again together was not to be missed.

The restaurant was only a block or two away from the main promenade of Blackpool and maybe five to ten minutes walk from where we were parked a little further in. This being Blackpool, there is plenty to do and a visit to Nando's can either start or finish a great night out on the tiles! I remembered the restaurant for being a little hidden but it didn't take too long to find again as I was with friends who were local to the area but for anyone seeking it for a virgin visit may need to consult their maps once or twice.

The interior is a mixed affair. The lower floor where the kitchen resides is quite light, fresh and very airy with large window walls which curve and swoop very elegantly, coupled with large and bold lighting fixtures and lampshades which look modern and pleasant. The upper floor is a lot more cosy. The lighting is much darker and dimmer which is home to the bar and where I could imagine parties and large gatherings would be placed. If you wanted frozen yogurt, you'd have to make the effort of going downstairs as there's only one machine. Also, be prepared to mount a mountain expedition to get to the toilets as, if you're on the lower floor like we were, it takes three flights of stairs before you get there which is a little much to ask for some people.

The person who served was bright and keen to help us and show us to our table as well as taking our orders when we got to that point. Unlike some of my past trips, the food took quite a while to make considering that there were only four other tables occupied on our floor and none upstairs. It was a sad end to a run of fast service I had personally experienced up to this point. The range of sauces though was full and we didn't need to scrounge around looking for what dressings we wished to try. The frozen yogurt machine though, despite not being broken, was missing its flavour label so it was a mystery flavour (Chocolate in the end!) which wasn't exactly organised. Once the food had eventually arrived, it was clear to see that even though it had taken a relative eternity to make, that the food wasn't heavenly. There were a lot more burnt areas of the chicken then I had wished to encounter and the amount of spice was noticeably lower than usual. The redeeming quality was the size of the portion which was above average. The ratatouille side was more tomato-based than I had had in the last three visits to Nando's I've had which was a welcome return to traditional ratatouille.

A side note was that the male toilets weren't sufficiently stocked with toilet paper, as was noted by my unfortunate dinner companion!

To sum up, this outlet did well enough so we all had a good time; but it was mostly down to good customer service and clean atmosphere and sadly not the food.