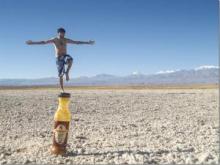 How Helpful?:
Author:
Marc RYN
Number of Visits:
5-10
How Busy?:
Almost Full
Date of Last Visit:
Saturday, June 4, 2011
Time of Day:
Weekend Dinner (Inc Friday)
Rating:
4.38 / 5
Friendliness of Staff:
4 (Good stuff. Very polite)
Speed of Service:
5 (Under 5 mins - I had only just got back with my cutlery and sauce)
Quality of Food:
4.5 (Great - Very tender, piping hot, not at all burnt, dripping in sauce)
Decoration & Cleanliness:
4 (Very clean, newly furnished, impressive artwork and lighting)
Comments - Stand out in our monthly competition! What did you eat? Unique aspects? Parking/transport tips?:

I decided to celebrate my 22nd birthday at Nando's (where else?) and opted for this particular branch for various reasons! Having been in regular contact with Manager Kerrina for a few months (and more recently Ross), I was reassured that bringing a group of up to 30 people on a Saturday night should not be too much of a problem! Other Birmingham branches, especially Broad Street, are known to be particularly busy on Saturday nights but Paradise Forum has more scope to cater for special occasions during supposed peak hours.

I phoned the branch around an hour before our arrival and was reassured that everything was in place!

The 30 man party started arriving just before 7:20 and everyone was seated immediately. You would have expected ordering to have been far more chaotic than it actually was considering the numbers. In reality, everything went smoothly as the staff used all of the available tills extremely efficiently. A bonus linked to this visit was my victory in the Birmingham Paradise Forum photo competition on their Facebook page. This meant we were entitled to 4 meals of our choice as well as drinks and starters! I am still baffled as to why no one else entered the competition!

As far as I'm aware, there were no problems with all the orders and everyone's food arrived in good time especially considering how many of us there were. It was a very nice touch to be offered a bowl of chicken wings (wing roulette) on the house as it was my birthday. They were demolished by one lucky half of the table! My half chicken was as expected; the only slight issue was that I was not completely stuffed on completion. This minor problem soon faded away as my choc-a-lot cake (once again, on the house) arrived to a chorus of ‘Happy Birthday to you’. It really was a nice touch!

We now know that the branch ratings for West Midlands Nando’s is a source of great competitiveness in board meetings, hopefully with this review and others to follow from other members of the party, Paradise Forum will cement its place as number one!