What Happened to Nando's in Israel?

In continuing my series on what happened to Nando's in certain countries, I thought I would focus on another once-strong Nando's outpost: Israel.

So what did happen? Well, Nando's Israel closed the doors of its restaurants some time in 2004. It is unclear how successful these restaurants were, and the exact reason for closure. One theory is that this was around the time Nando's began to expand into other Middle-Eastern countries such as Kuwait, Oman, Qatar, UAE, Lebanon. Politically speaking, these countries may not have been happy with Nando's also operating in Israel, so perhaps the closure was due to global management seeing a potentially more lucrative market elsewhere in the region. It could just as easily have been down to the restaurants not being financially successful, but based on the sudden closure, and internet-based demand for a reopening, this seems less likely. If you know more, please comment below.

And a brief summary of Nando's in Israel:

Israel was always a country close to the founders of Nando's, with Robbie Brozin's family being jewish. A family member (possibly brother) called Daniel Brozin opened the Israeli franchise in July 1992, and acted as CEO all the way through to its closure in 2004. During that time the franchise was at least at times successful, as detailed in this article. The article also suggests big plans with up to nine locations nationwide, though it is unclear if this ambition was ever fully realised. At time of closure, Nando's Israel had four restaurants, all in the Tel Aviv area.

If anyone has more information, or even visited a Nando's in Israel before it closed, please either comment below or contact us using [email protected]. 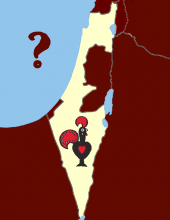 In the mid-90s there was a Nando's in the Raanana industrial estate, I think on the corner of HaMasger and HaHaroshet. It was good at first but seemed to go downhill after a while.

My family were big Nando's

My family were big Nando's fans. Their grilled chicken was astounding.
We were very sad when they closed down.

GIVE IT BACK! PIRI PIRI sauce

GIVE IT BACK! PIRI PIRI sauce ghghghghghh :P

one of my favorite

one of my favorite restaurants as a teenager was nandos in "hutzot hamifratz", a shopping center which is located in haifa bay area...
driving there and seeing the place makes my stomach itch for some lemon herbs peri peri sauce and some spicy chicken

Nandos operated in Israel from 1992 and up until the end of 2007 and the full story appears in local media archives (although it's obviously in Hebrew).
In short, the Israeli Nandos operations were licensed by a certain company (50% owned by the international company and 50% owned by two local relatives) which apparently went into financial problems and in Aug 2005, the operations were sold to a new owner. The new owner actually kept the same manager (Kenny Brozin) and even extended his responsibilities until his resignation in Jun 2006. The license expired in Feb 2006, the new owners failed to reach a new contract with the international company but kept running the restaurants until the international company filed a lawsuit on Aug 2007 demanding to cease operations and a judge accepted the lawsuit on Dec 2007. Before they closed, they had 17 restaurants across the country. This was a messy divorce and I really can't tell if the new owner is to blame, if he fell victim to a Brozin family battle/different corporate aspirations or if everyone's responsible.
As an occasional client since 1997, I can testify that they went through several phases of operation, there was a constant decline in standards and a huge inconsistency between different restaurants. I would point out that the decline occurred many years before the operations were sold to the new owner and it was obvious that the original recipe had been neglected rather early on.