What Happened to Nando's in Africa?

In continuing my series on what happened to Nando's in certain countries, I thought I would focus on the continent of Africa as a whole, since most countries I will discuss only ever had one or two restaurants. Note that South Africa is excluded from discussion here for obvious reasons.

So what's the story? Well, expansion in Africa was a big part of Nando's early ambitions (I'm talking late 1980s/early 1990s), and they quickly spread into numerous countries. A definitive list of which countries is almost impossible to come by, but research and hearsay puts it roughly at Angola, Botswana, Ghana, Kenya, Lesotho, Malawi, Mauritius, Namibia, Nigeria, Swaziland, Zambia, Zimbabwe, and possibly Uganda. If you compare that to the 2014 list of Botswana, Mauritius, Namibia, Swaziland, Zambia, and Zimbabwe, you can see the difference. It seems Nando's simply never took off in the other countries, and many of them closed before the worldwide Nando's phenomenon really exploded in the latter 2000s.

The countries which lost their franchises can be roughly split into categories:

Even the countries which still have Nando's can be particularly elusive. Anyone trying to find the location of their local Nando's in Zimbabwe would have needed a lot of patience until a website was finally launched last year. When I approached them back in 2012, an employee put it mildly when they said: "Information can be a little hard to come by". Of course this isn't helped by the unfortunate fact that many Africans still do not have easy internet access. As a result, no one really knows how many Nando's there are in a country such as Botswana; I managed to track down 10 in my search - let me know if you can find more!

With genuine information from Nando's not forthcoming, perhaps the myth of the lost African Nando's will simply endure. Whatever happens, hopefully the recent trend of franchises closing rather than opening will reverse.

For our unique list of every known Nando's in Africa, check out our Africa homepage.

If anyone has more information about Nando's in Africa, please either comment below or contact us using [email protected]. 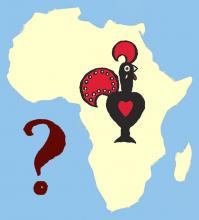